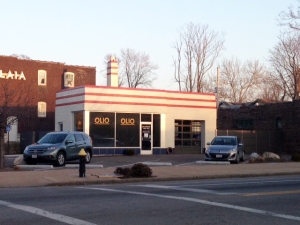 Holy delicious! This is the first thought that pops into my head when I try to think of a way to describe Olio. When pulling up to this restaurant, one may ask themselves how something so amazing could come from what once was a small, average gas station. Well to answer your question, this Old Standard filling station was converted into a restaurant after sitting vacant for 30 years. It was then connected to the building next door where its sister restaurant, Elia is located. Many of the original features in the main dining area of the building were left as is, while others had to be rebuilt. Coupled with soft lighting, quiet music, and creative décor, the atmosphere at Olio is like none other in St. Louis.

Olio does not take reservations so with fingers crossed, we arrived at around 6:30 pm on a Tuesday and were immediately seated with our food and drink menus. The beer offerings are a bit pricier than one would expect to find in St. Louis but the selection is unique. The extensive wine list, managed by renowned sommelier Andrey Ivanov, features wine and bubbly from around the world. We were fortunate enough to meet Andrey, who graciously volunteered to take us on a tour of the wine cellar that sits beneath Elia. The cellar houses beer, wine, bubbly, whiskey, a bit of produce, and even a giant red boiler that was kept from the original setup. Outside of the wine cellar is a private dining table that can comfortably seat 14 people.

After a long deliberation about the drinks, we went with a Weihenstephaner “Korbinian” doppelbock beer for my husband and Giusti and Zanza “Nemorino Bianco” wine for me; both did not disappoint. We were told that the dishes are meant to be shared and we ended up choosing four. Our first dish, and the best thing that I have eaten since my blogging adventure began, was the burrata. These two heavenly pieces of cheese were drizzled with the most delicious olive oil and spice which made them slightly sweet. I went to bed that night thinking about this dish and I would return for it alone. Next, we moved on to the hummus with chopped nuts, smoked paprika, and noticeably high quality EVOO. The hummus was cold and silky smooth and balanced with just a bit of crunch from the nuts. It was served with fresh bread that had a perfect crisp crust and a soft center. My husband then chose the Turkish flatbread with beef and cilantro which I obviously had no part of while I went for the cauliflower tartine. This is best described as a cauliflower salad with a hint of curry served on three pieces of the same delicious bread that came with the hummus. While this was tasty, I just could not stop thinking about that burrata!

Because we were having so much fun we decided on another round of drinks and a dessert. We shared a white chocolate raspberry “pie in a glass” that was created across the street at La Patisserie Choquette. This small dessert was the perfect end to our meal.
While I was sad for this night to end, I know I will be returning for a glass of wine on the [surprisingly large] patio once the weather warms up!
I wanted to give a special shout out to Andrey for walking us through the space and making it feel like home.