With the ramen craze in full swing, I decided it was time to check out one of the new hotspots for myself. After much anticipation, Nami Ramen finally opened its doors at the corner of Maryland and Central Ave. in Clayton. This completely renovated space is an order at the counter, food is brought to your table concept. It features an open kitchen with counter seating as well as a long community-style table in the center of the restaurant.

Before talking about the menu, I want to point out that the ramen of today is not your cheap, Styrofoam cup of noodles that you heat up in the microwave. We are talking a large bowl of homemade broth, a substantial serving of noodles, protein, and fresh vegetables. The menu at Nami Ramen features ten ramen options, most of which are pork based. However, there are seafood, veggie, and chicken options too. 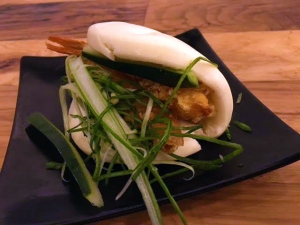 We started with the tempura shrimp bao. This appetizer features shrimp tempura, cucumbers, green onion, and chipotle mayo inside a fluffy steamed bun. The greens created a nice crunch against the soft bun and a really good contrast to the fried shrimp. While tasty, I found my entrée so large that an appetizer almost wasn’t necessary.

I chose the veggie ramen for my entrée. My large bowl of broth was served with noodles, roasted tomatoes, sprouts, mushrooms, edamame, brussel sprouts, seaweed, and green onion. I loved the rich flavor of the broth although my husband pointed out that it seemed a bit oilier than others we’ve had. My only complaint about the dish itself is that the brussel sprouts were served whole and rock hard making them a little difficult to eat. 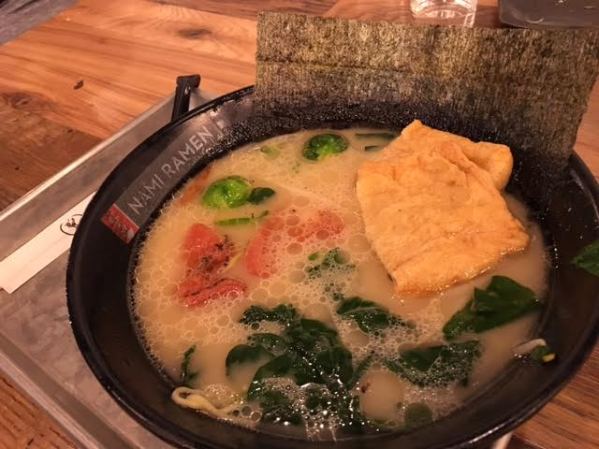 While a little pricier than your typical order at the counter restaurant, it seemed right in line with other ramen restaurants in the area. Portions were so large that I was even able to get a second meal out of it. Just be warned, until you master the art of eating Ramen, be prepared for a few slirps and splatters.